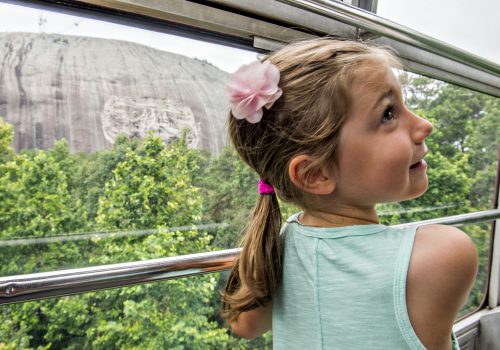 ​17 Reasons You Should Go to Stone Mountain

You’re at the bottom of Stone Mountain, lacing up shoes and stepping from gravel to granite as you ascend the gradual slope of smooth, white rock. You navigate between shrubby trees and piles of stones, pausing now and then to take in the expansive natural scene around you. Zoom out a bit. The frame fills with hikers like you, with runners skipping from rock to rock, aged explorers trekking alongside kids on field trips. Pan out even further and the 3,200 acres of exposed granite stretch beyond view; people are specks of color on the mountainside. Out of frame is the magnificent stone carving on the opposite face of the mountain. Visitors gather here, facing the figures cut into the rock, anticipating a dazzling laser light show. Now back to you, climbing the mountain, claiming this revered rock for your own, small step by step.

Stone Mountain, sitting just outside Gwinnett County, is a historic monument to our area’s diverse offerings and rich cultural experiences. The mecca of the South, this beloved attraction boasts so much inspiration and beauty, we’d be heartbroken if you missed out on all it has to offer. That’s why we made a list of the top 17 reasons you should visit Stone Mountain Park, in no particular order.

Sure, so is the Taj Mahal, apparently, but we heard that’s a snoozefest. Many claim Stone Mountain is the largest piece of exposed granite in the world, with over five miles of igneous rock jutting from the ground and stretching 825 feet into the sky. The stone is technically quartz monzonite, a rock similar to granite, formed from magma rising from the Earth’s crust. But who needs technicalities when you have statements?

2. And also a historic memorial.

The largest high-relief sculpture in the world, the carving on the side of Stone Mountain features three southern generals: Stonewall Jackson, Robert E. Lee and Jefferson Davis. A series of artists contributed to the carving from 1909 to 1972, and the intricate detail and staggering size of the artwork is remarkable. Originally a tribute to southern history, the art now represents how far we’ve come as a nation. Martin Luther King Jr. proclaimed “Let freedom ring from Stone Mountain of Georgia,” and half a century later, this cultural common ground does ring. Millions come from around the world each year to see the monumental artwork etched into the mountainside.

Stone Mountain, or “Atlanta’s Backyard,” offers 15 miles of scenic hiking and walking trails, ranging from easy to moderate. Take it slow and stop to admire the flora and fauna, or let the fresh mountain air invigorate you on a more challenging hike. It’s a 1.3 mile trek to the summit, and it’s worth every step – keep this in mind near the top, where it gets a little steep and you start wondering what you’ve gotten yourself into and will you have to live here now and what are the kids going to eat for dinner? There are handrails and steps up there and we’re confident you can make it to the top and back.

4. And shrimp live here. On a mountain!

Zoom in on a microscopic level and you’ll see the wonders of nature at work in Stone Mountain’s geological formations. The depressions at the top of Stone Mountain seasonally collect water, forming the mountain equivalent of tide pools. These little puddles are home to a few endangered plants, as well as a small crustacean called the Clam Shrimp. The shrimp leave tiny eggs in the soil, creating an astonishing cycle of life on the face of the rock. Peer closely and you’ll see the little guys swimming around – just don’t go filling your canteen with cocktail sauce.

5. It’s a wonderworld of plant life.

We paint a pretty scene, but life on the face of Stone Mountain can be pretty rough, just ask Jackson and Lee. It takes a special plant to survive the elements on a granite outcrop, so the trees, flowers and fungi that do take root tell a beautiful tale of determination. Much of the flora that does exist on Stone Mountain is rare across much of Georgia. One of these is the Stone Mountain Yellow Daisy, discovered as a new species in 1846 and found only within a 60-mile radius of Stone Mountain. The Yellow Daisy is the inspiration for our annual Yellow Daisy Festival, a celebration of beauty and beloved tradition for arts and crafts lovers. The award-winning Yellow Daisy Festival takes place in late summer and features more than 400 artisans and craftsmen from across the country.

On a clear day, you can see 45 miles of magnificent Georgia landscape and the glittering Atlanta skyline from the Stone Mountain summit. Bring a blanket and find a spot to settle on the endless countertop of rock as the sun rises or sets. It’s beautiful. It’s breathtaking. You’re the queen of Stone Mountain. You own the world.

7. You’ll meet all kinds of people.

Gwinnett is proud to be the most diverse county in the South, and the same theme holds true for Stone Mountain Park. More than four million people make the journey to Stone Mountain each year to experience the rich beauty and culture of this historic landmark. Shannon Byrne, who grew up in the area, celebrates the diverse community of Stone Mountain with her project, I Am the Mountain. Her website features the many faces of Stone Mountain, including video interviews and passionate creative pieces about the park’s visitors, people hailing from Kenya, Japan, Israel, Mexico, and right here in Gwinnett County. Take a walk up the mountain and you’ll probably run into Byrne herself, otherwise known as the “mayor” of the summit on Foursquare.

8. The Fantastic Fourth event is magical.

Fireworks four nights in a row. Laser shows. Did we mention laser shows?

9. Plus, the Scenic Railroad is energizing and educational.

A full-sized locomotive from the 1940s with open-air cars, the Scenic Railroad tour takes you five miles around the mountain. It’s a storytelling excursion, complete with narration about mountain history and some favorite old railroad songs.

10. The Summit Skyride is breathtaking.

If you’ve already hiked it or you don’t want to, ride a high-speed Swiss cable car from the bottom of Stone Mountain to the peak, almost 1,000 feet above ground. Along the way you’ll come face-to-face with Stonewall Jackson and co. of the stone wall’s memorial carving. After a thrilling, scenic ride on this rock’s top attraction, you’ll reach the panoramic views at the peak. See #6 above.

11. And Snow Mountain is snow joke.

Snow Mountain, the region’s only snow park, features snow tubing slides for adults and kids alike. One of them is called “Avalanche Alley.” What more do you need to know?

12. If you ignore all 16 other reasons to visit Stone Mountain, don’t ignore this one: The Lasershow Spectacular.

Long live lasers! The Lasershow Spectacular is the world’s longest running lasershow, a 30-year standing Atlanta tradition drawing more than 25 million people to Stone Mountain’s iconic “Laser Lawn.” Multi-dimensional images dance to cinematic music across a screen taller than the Statue of Liberty herself, with magical fireworks lighting up the sky’s stage. The impressive visuals matched with the sound of Pink Floyd or Outkast reverberating from the rocks might even make you cry. The 45-minute show is free with parking admission.

13. There’s music in this mountain.

Remember when we said Stone Mountain rings? It literally rings. Coca-Cola donated a 741-bell carillon to the park after exhibiting it in the 1962-65 World’s Fair in New York City. The hills are alive with the sound of music decades later, as the redwood and steel carillon rings out daily.

14. The covered bridge is the perfect place to spend a lazy Sunday afternoon.

Rustic and charming, the covered bridge is somewhere you might run into Christopher Robin and Pooh bear, so idyllic is the walk and destination. The century-old bridge leads to Indian Island, a picturesque place for a nap in the sun or stroll along the water.

14. And the Grist Mill will make you feel even lazier.

Dating almost two centuries, our authentic pewter-colored mill was moved to Stone Mountain from Ellijay, Georgia in 1850. This quaint piece of history sits in one of the most scenic and serene spots in the park, a perfect spot to picnic or take a hiking break and relax.

Whether you want to rough it or retreat in comfort, the stars are brighter and the campgrounds better in Stone Mountain Park. Rated Georgia’s #1 campground by Woodall’s, Stone Mountain offers 431 campsites, including yurts, RV hook-ups and primitive tent sites. Roll out your sleeping bag, rustle up a campfire and take a few days to experience all other 16 Stone Mountain delights on this list.

16. And the golf course is first class.

Grab your clubs and join the club of golfing elite who have experienced the 18 holes of pristine green at Stone Mountain. Stone Mountain Golf Club boasts two championship courses, Stonemont and Lakemont, meandering through the pines and natural rock formations at the foot of the mountain. Golfers at any skill level will enjoy the heather and hazards, and if the mountain views don’t move you, the Sunday brunch at The Commons Restaurant probably will.

17. So basically, Stone Mountain Park is perfect and beautiful and inspiring and has all the attractions.

Just come visit and see for yourself. 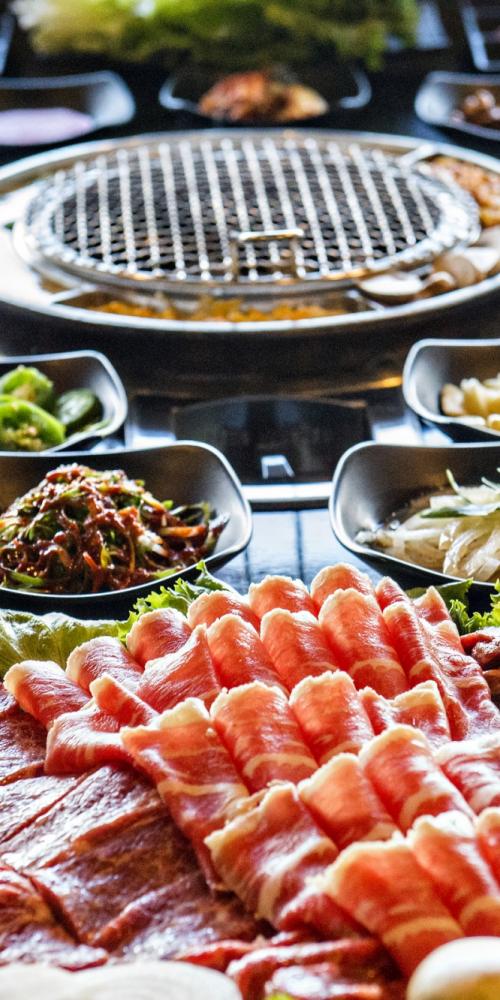