And no wonder: The elaborate mandir (Sanskrit for “temple”) was erected, stone by stone, in adherence to ancient Hindu architectural guidelines. The beloved present-day leader of the BAPS sect of Hinduism, Pramukh Swami Maharaj, consecrated the groundbreaking in 2004; construction was completed in 2007. 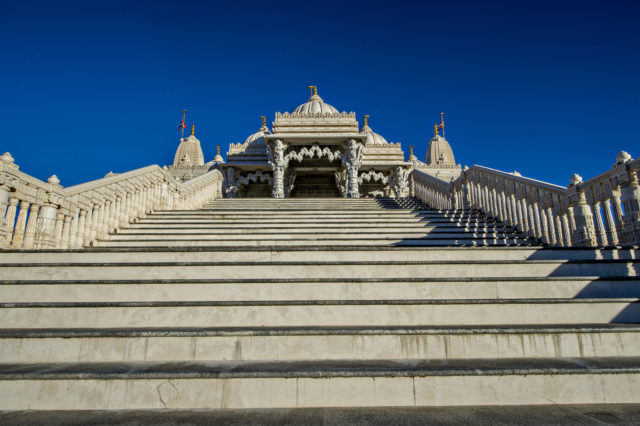 Before 2007, Atlanta’s BAPS community worshiped in a converted skating rink in Clarkston. Fast outgrowing that facility, they secured a strategic new location — at the intersection of Lawrenceville Highway and Rockbridge Road — close to Gwinnett’s thriving Indian-American population. Besides daily worship, the campus hosts conferences, weddings, and youth sports and counts a handful of Swamis (spiritual leaders similar to monks) as permanent residents. The mandir is free and open to the public, though first-time visitors should purchase the $5 audio tour. Be sure to spend some time simply walking in silence for an experience that’s equal parts art appreciation, cultural immersion, and quiet contemplation.

Read on for an exploration of the building’s architectural highlights. 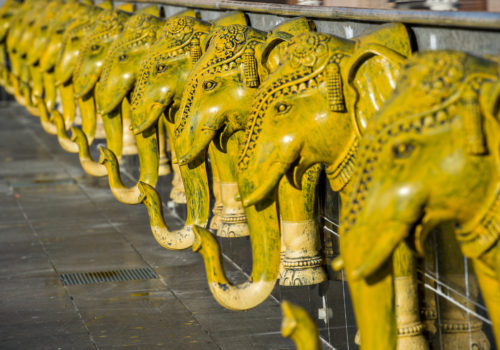 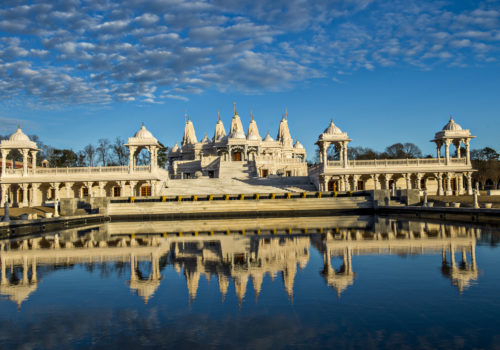 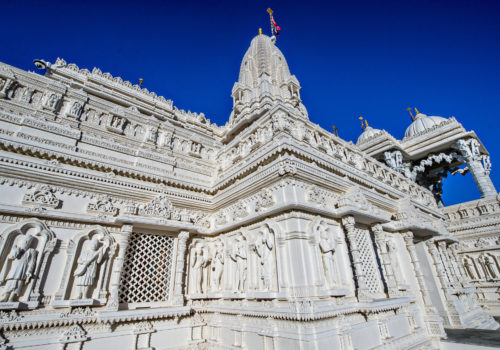 When turned on, these yellow elephants shoot water from their trunks to fill the reflection pond. Native to India, elephants embody the virtues of strength and intellect. It’s a common misconception that Hindus pray to animals. Rather, they respect nature and the virtues those animals represent.

The cultivation of inner peace is central to Hinduism. Mandir is Sanskrit for “a place where the mind becomes still.” A reflection pond leading to the grand staircase helps foster a sense of calmness before you even walk in the doors.

Within the Hindu sect known as BAPS (Bochasanwasi Shri Akshar Purushottam Swaminarayan Sanstha), some 900 Swamis have dedicated their lives to the organization’s spiritual and cultural activities. Garbed in the traditional bright orange, they have taken a vow of celibacy and lifelong service to the mandir.

Lilburn’s BAPS mandir is home to nine Swamis, some of whom travel around the Southeast and some who stay in Atlanta to perform the mandir’s daily rituals. They hail from all over the globe, including England, Africa, India, and Canada. Your best chance to see them in action is during a prayer ritual called Arti, open to the public each day inside the mandir at 11:15 a.m.

The mandir’s exterior is Turkish limestone and sits on a base of Indian pink sandstone. The interior is carved from Italian Carrara marble. The mandir’s roof reaches skyward in five majestic pinnacles and thirteen domes. 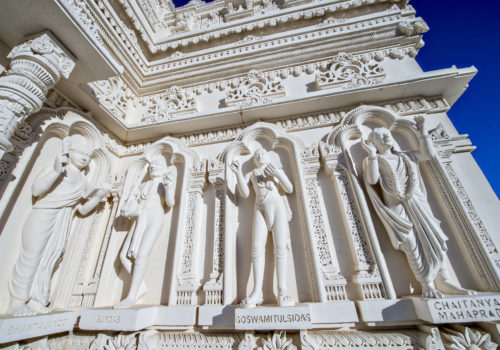 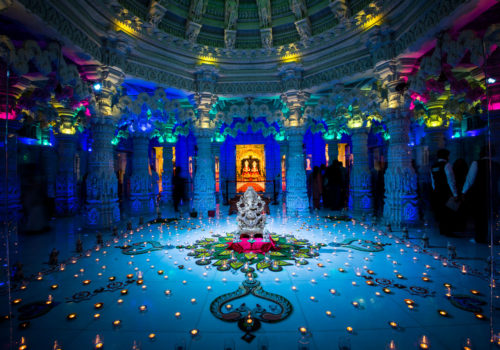 It's All in the Details

Sculptures of Hindu sages, heroes, and scholars line the exterior. The mandir consists of more than 34,000 stone pieces, all hand-carved in India and assembled in Lilburn like a giant 3D jigsaw puzzle.

State of the Art Shrine

Inside the mandir, the clean white marble is juxtaposed with the vibrant colors of the shrines and — for special events such as the Diwali festival (pictured) — brilliantly hued lighting. Despite its ancient appearance, the mandir is outfitted with modern features such as built-in LED lights and a state-of-the-art audio system. 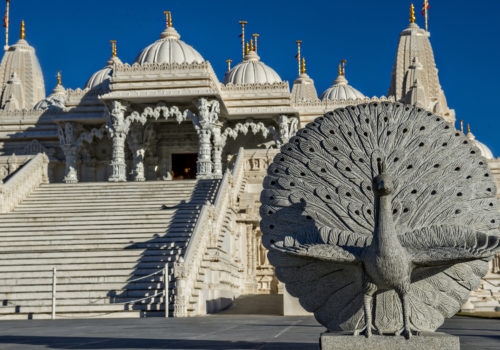 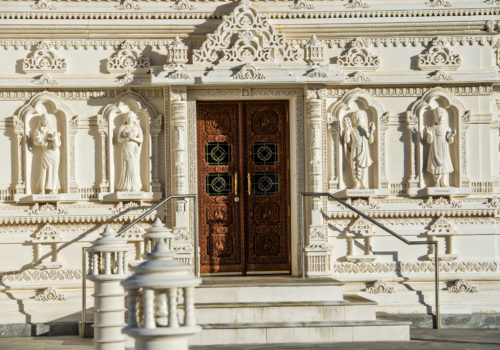 The mandir’s intricately carved ceiling consists of forty-two stone slabs, all with unique designs to underscore the notion that “the whole world is one family.” Remarkably, the mandir’s construction utilized no structural metal. A keystone in the center of the ceiling was given a single twist to lock all the slabs in place.

Birds of One Feather

Though not spiritual in themselves, peacocks are the national bird of India and a symbol of peace and unity. Prized for their beauty and the unity of their feathers, their likenesses often grace Hindu temples.

The mandir’s doors are made of teak, a soft wood that is very amenable to carving. Teak does not grow in the continental U.S. but is pervasive throughout Southeast Asia.

Check out our Know Before You Go Guide to the BAPS Mandir.