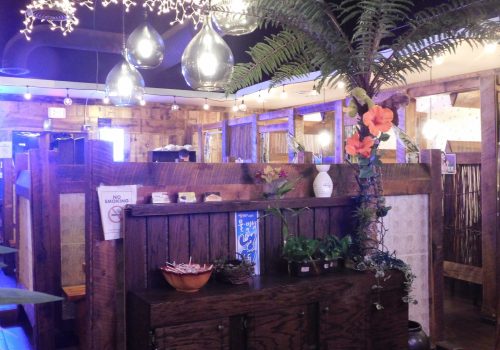 How do you beat the hot nights of summer? Well, one option is to go out and explore new drinking holes that serve some of the best food to go with your nicely chilled beverage of choice. For many Koreans in Gwinnett, To Dahm Gol is an institution. It has been around for nearly two decades without changing much in an ever changing environment where restaurants strive to serve what is new and trendy. There are no frills in this tiny cafe-style restaurant located on Pleasant Hill Road next to What the Pho?

As with many late night establishments, To Dahm Gol is known for its menu of "anju" which is the Korean equivalent to tapas. This are dishes that are served and meant to be shared over a drinks with family and friends. Some staples include kimchi jeon, which is a slightly crispy kimchi pancake that is served family style for everyone to enjoy. Another favorite is the ever popular bossam, boiled and steamed pork belly served with pickled vegetables to be wrapped up and enjoyed. Other establishments covered in the Seoul of the South offer this decadent treat, but few do it better than To Dahm Gol. The melt in your mouth pork works beautifully with the pickled radish and kimchi sides, and always leaves me feeling satisfied. Our final dish which was an afterthought turned out to be one of the biggest surprised of the night. Kimchi tofu is exactly what you expect it to be at most restaurants, but To Dahm Gol, their version has huge, generous chunks of crispy fried pork. We ordered it as a "lighter side" and it ended up being our favorite of the night.

The interior is humble and reminiscent of an older style Korean bar in Seoul. Private booths allow for your party to enjoy the food and conversation in a pleasant environment without it being too loud or distracting. The menu boasts a full range of Korean hits including soups and casserole dishes, so we plan to return with a larger group in the near future to try more of their fantastic offerings. As summer draws to an end, be sure to add To Dahm Gol to your bucket list of places, and bring a healthy appetite. You are certain to not be disappointed.

Our 5 Favorite Spots for Korean BBQ

The Seoul of the South
comments powered by Disqus