Once you visit, you might notice that residents rarely leave the friendly confines of Gwinnett. According to Nicole Hendrickson, the county’s Community Outreach Director, there’s a perfectly reasonable explanation for this.

“I feel like I don’t have to go anywhere on vacation because Gwinnett is a vacation,” Hendrickson said. Honestly, it’s hard to disagree with the Duluth resident, and mother, who believes her home more than lives up to its unofficial slogan, “Atlanta’s Playground.”

Here’s the thing, Gwinnett County’s got everything a major city has — great food, arts, entertainment, sports, parks — and then some. Lest we not forget, the beaches in the spring and summertime (thank you, Lake Lanier!), and tubing down the Chattahoochee River. (Side note: Do yourself a favor and make “The ‘Hooch” a regular part of your vocabulary). If Hendrickson’s claim seems bold, then you haven’t spent enough time in Gwinnett.

The list of things to do is as long as Gwinnett County is diverse. If you’re a culture lover, maybe you’ll want to check out some comedy at the award-winning Aurora Theatre in Lawrenceville, or enjoy some live music compliments of legendary promoter and Eddie Owen at the Red Clay Music Foundry in Duluth. Then again, some folks might prefer visual to performing arts, and that’s why a stop by the Hudgens Center for the Arts, LONA Art Gallery, the Gwinnett History Museum, and the Dizzy Gypsy are good bets.

“Here’s the thing, Gwinnett County’s got everything a major city has — great food, arts, entertainment, sports, parks — and then some.”

If you’re looking for something more active, Gwinnett’s home to the top parks and recreation system in the state. NBD. Maybe you and the pups will want to make a stop in dog-friendly Tribble Mill Park, or work off a week’s worth of Gwinnett’s exceptional dining scene on the ropes courses of Tree Top Quest. Don’t live nearby? Just looking for a daytrip escape? A stop at BAPS Swaminarayan Hindu Temple, the largest outside of India, will leave you in jaw-dropping awe for several hours.

Want sports? You can watch future Major League All-Stars at Coolray Field when the Gwinnett Braves are home. Perhaps you’re from a hockey town, or just can’t quite let go of the Atlanta Thrashers (or Flames for that matter). In that case, let the Atlanta Gladiators fill that void. But wait, there’s more, and this is obviously just the tip of the iceberg. “There’s opportunities; there’s a lot of activities,” Hendrickson tells us. “I can’t think of one thing that you can say, ‘Oh, we don’t have it.’” 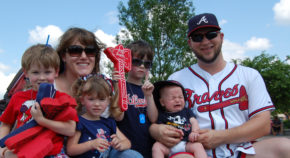 Nick Masino, a Suwanee resident and Senior Vice President of Economic Development and Partnership Gwinnett at the Gwinnett Chamber, believes that if anything shows how the county lives up to — and many cases surpasses — its billing as “Atlanta’s Playground,” it’s in the proactive spirit and growth of its towns. He speaks with enthusiasm and conviction when mentioning the developmental potential of several areas including Sugar Hill, which is known for its twice-monthly family event, Thursdays at the Hill, but will also benefit from $150 million in construction over the next two years.

“May it be Norcross, Sugar Hill, or Lilburn, Lawrenceville, the cities are actively redeveloping and creating activity centers or expanding their activity centers,” Masino says. “These really cool, walkable places are expanding at a suburban scale.”

Translation: if you build it, the people will come, and whether folks are here to climb Stone Mountain, fuel their adrenaline rush at K1 Speed, or simply drink beer and play corn hole, there’s always an option. “You really don’t have to leave Gwinnett because it’s a community. From indoor to outdoor activities you can definitely find something to do,” says Hendrickson, who also boasts that part of what makes Gwinnett stand out in the “fun” category is its international cuisine.

A local foodie, and social maven, Masino agrees. “I travel the world and there’s restaurants that are not anywhere in metro Atlanta but they’re in Gwinnett,” he says with pride. “When a restaurant opens up in Georgia, but they’re also in Shanghai and Seoul and they chose Gwinnett County to be in, that kind of tells the story of the county’s uniqueness.”

Hendrickson is convinced maybe you don’t need to travel far to experience greatness. She jokes that Gwinnett is her vacation and “staycation” home. (One look at one of our itineraries, and who would blame her?) For every activity, Gwinnett has more than a few options offer up, no matter how big or small the experience.

“We have everything,” Hendrickson says. “When people want to go travel around the world to get pieces of this and pieces of that, or want to look at pristine architecture and history — we have that. People who want to go and escape to the beaches, OK, we have that too. It really is a little piece of everything just in one great county.”