Where to go, and what to order, when you're craving authentic Korean street food.

If you want to feast on homestyle Korean food, you could grab your passport, drive to the airport, and catch a 15-hour flight to Seoul. Or you could head to Gwinnett County and explore the wealth of culinary options in Atlanta’s Koreatown. Most Americans know about Korean barbecue, but in South Korea, you’ll find stalls and tents selling treats meant to be eaten on the fly. For Sarah Park, a South Korean native and Gwinnett local, street food is a reminder of home. “It’s like burgers or chicken noodle soup here. You see places selling them on every street, and it’s something you grew up eating,” she says. Her favorite comfort food is Korean fried chicken (KFC). “It’s cut into smaller pieces than American-style fried chicken, and it’s double-battered so it’s more crispy,” she explains. Here are nine outstanding restaurants where you can sample some of the best Korean street fare in Gwinnett. 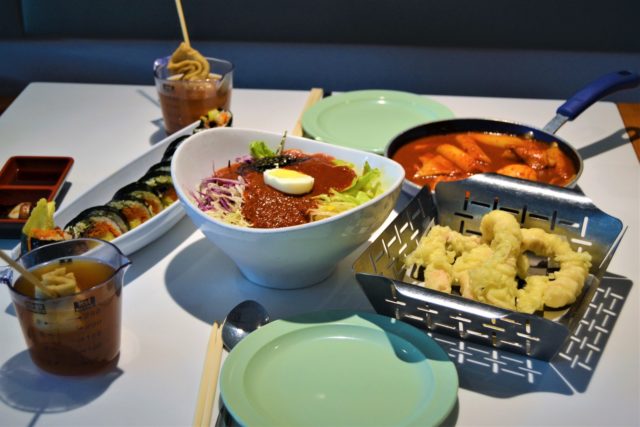 The atmosphere is moody and neon-lit, but the staff at this Duluth restaurant is warm and welcoming. Koreans, like Southerners, appreciate the fried chicken and waffle combination, though the waffles in this rendition are thicker and denser. You can get saucy chicken, but plain is the way to go to balance the sweetness of the maple syrup

This no-frills spot in Suwanee’s Assi Plaza delivers on its name. But don’t expect the same pie you’ll find at your neighborhood Italian joint. Here, the standout dish is the sweet potato pizza, which utilizes its namesake veggie as a topping as well as pureed and stuffed into the crust. It’s a decadent treat and—accented with peppers, corn, beef, pineapple, and spicy slaw—not your typical flavor profile.

Inspired by a popular chain in Korea by the same name, this Duluth nightspot is open daily until 2 a.m. In addition to food, there are karaoke rooms available for rent. Exercise your vocal cords, then refuel with your crew in one of the large, high-walled booths. Try the bossam, a platter of succulent pork belly, lettuce wraps, and kimchi that’s perfect for a group. The crisp kimchi pancake is also portioned for sharing.

Duluth’s Dan Moo Ji offers a sleek, fast-casual atmosphere with WiFi and televisions, so you can plan on sticking around awhile. It’s all about the kimbap here. The spicy chicken kimbap is the standout, with juicy chicken pieces rolled with veggies. (Watch out: The chicken is quite hot.) But there are plenty of other varieties, including beef bulgogi, tuna, and squid. For another kick of heat, try the spicy stir-fried rice cake (ddukbbokki).

The woodsy interior of Suwanee’s Poetree Cafe creates a convivial setting in which to enjoy Korean bunsik. Translated to “food made from flour,” bunsik will satisfy all of your carb cravings. If you want to get really indulgent, order the creamy pasta carbonara served in a donkatsu bowl. (Donkatsu is a thin, deep-fried pork cutlet.) One of Poetree’s other stars is the tuna kimbap. Although it looks like a sushi roll, kimbap uses sesame oil instead of vinegar for the rice. Biting into a piece is at once sweet, savory, and—thanks to all the veggies—crunchy

This is another Duluth destination for fried chicken lovers. If you can only try one preparation, order the snow onion chicken tenders. Plump, boneless pieces of chicken are twice-fried and smothered in a pile of thinly sliced onions, then tossed in a mayonnaise-based dressing. It looks impressive and tastes even better. There’s also tikkudak, chicken that’s been fried and then baked over a charcoal grill, making it extra crispy and addictive, as well as the flavor-packed, sweet-and-savory spicy garlic chicken.

There’s no barbecue at bb.q Chicken. BBQ actually stands for “best of the best quality,” and “olive” refers to the olive oil used to fry the chicken. Part of an international chain, this Duluth restaurant has nailed the art of KFC. Do yourself a “flavor” and get an order of the half-and-half platter of boneless chicken so you can try two sauces. Both the secret spicy and honey garlic sauces strike a balance between sweet and hot

This article, written by Lia Picard, originally appeared in Volume V of Explore Gwinnett Magazine and has been condensed for exploregwinnett.org