If you didn’t know already, the road to Y’allywood runs through Gwinnett County. In the last year, television and film productions generated $1.68 billion in the state for wages to local workers in over 9,000 jobs.

Thanks to a nice tax incentive more than 20 films (The Hunger Games, Divergent, Captain America: Civil War) and 50-plus TV shows (“The Walking Dead,” “The Vampire Diaries”) filmed in Atlanta and the metro area, with a vast majority setting up shop in Gwinnett County. Whether it was Fox’s “Sleepy Hollow” making use of Gwinnet’s Historic Courthouse in downtown Lawrenceville, or crew of the Gary Marshall ensemble flick Mother’s Day working out of Eagle Rock Studios in Norcross, the county’s leading the charge in metro area’s recent production boom.

In the last decade everything from the Oscar-nominated Denzel Washington film, Flight, to Tim Burton’s Charlie and the Chocolate Factory, have filmed in the area. With Eagle Rock Studios, and the forthcoming completion of the Atlanta Media Campus, the county is home to the largest TV studio under one roof and will boast the nation’s biggest studio backlot. At any given point, there are more than 30 productions going on in the state, and more than half of those crews are somewhere filming in and around Gwinnett County. 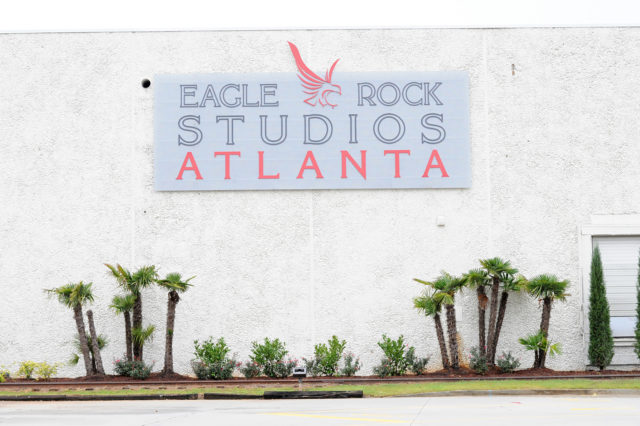 “It’s not that they’re not helpful other places in the metro Atlanta area, but in Gwinnett, they actually want to work with films,” says Doug Nicely, the vice president of studio operations at Eagle Rock, who has more than two decades of location scouting and management experience. “Movies go so fast that you really don’t need a lot of unnecessary red lights, you need the government to work with you and that happens in Gwinnett County.”

Nicely knows all about navigating the film production world. Working with Emmy-nominated producer Gideon Amir and trying to find homes for ABC/Disney’s series “Devious Maids” and “Resurrection” is what led Nicely and his team to convincing the owners at the former site of the Kraft Foods Southern United States Distribution Center to turn their space into a production hub. Eagle Rock’s four soundstages, alone, offer more than 115,000-sqaure-foot of space.

In attempt to bring a studio that rivals the big names in L.A., developer Jim Jacoby’s Atlanta Media Campus and Studios, is turning an old fiber-optic cable plant into a five-million-square-foot complex. More than a place for filming, the Atlanta Media Campus, upon completion, will include six soundstages, classrooms, offices, and multifamily housing upon completion. It’s in film development, while still keeping the community in mind, where Gwinnett’s role is becoming more apparent. “At the end of the day, it’s about creating jobs and about making sure business is healthy — small, medium, or large businesses alike — and the film industry touches on all those points,” say Lisa Sherman, the economic development director for the City of Lawrenceville.

“[It’s] a community where the cameraman and key grip feel just as a part of the neighborhood as the local schoolteacher or business owner.”

As Sherman sees it, the reason Gwinnett’s finding success is that the civic and political leaders are constantly in communication with the various production teams. It doesn’t matter if it’s Robert Redford and Nick Nolte’s A Walk in the Woods filming in Tribble Mill Park, or a sports flick taking over the Gwinnett Arena in Duluth, everyone is on the same page. “They want to be a benchmark for other communities to follow, and they’re striving to be that and as a result I think that paves the way for these film industries and these film companies — and really any business — to want to take note of the fact that, ‘Hey these people actually want us here,’” Sherman says.

In turn, what you get, is a community where the cameraman and key grip feel just as a part of the neighborhood as the local schoolteacher or business owner. “I have seen it with their location managers, just going on the ground, canvassing those communities, wanting to make sure they know when they’re going to be filming, when things are going to happen,” Sherman says, adding that, “when stuff is happening that impacts local business, they are on top of communicating it to the local community, and working in collaboration with the city to put out that information.”

And once the information’s out, location managers and others are having dialogues with folks like Lisa Anders. The longtime executive director of Explore Gwinnett and camera-ready liaison for the county has spent the last two years trying to work and meet the demand of filming requests. Gwinnett’s gift to film scouts is that it provides more than enough options. “You’ve got downtowns, parks, rural areas, and warehouses. I could give you a laundry list of what people have asked for and nine times out of 10 I have not said, ‘No, we don’t have that,’” Anders says.

According to Anders, production crews don’t have to sift through the red tape, and long permitting processes that often stall productions in major cities. They’re also getting food catered from local businesses, and finding places to sleep in nearby hotels, all the while bringing light to the county’s empty spaces. “They’re really making an impact and people don’t necessarily see it because they’re not walking in ‘Mother’s Day Production Crew’ shirts, but they’re spending a lot of money here,” Anders says.

Anders anticipates Gwinnett’s place in Georgia’s production industry only growing to be more prominent. There are plans for a dedicated film office in the future, and corresponding website to help crews and residents get updates on what’s going on in the community. Again, it’s that constant dialogue and open discussion that brings productions — major and independent — to Gwinnett.