It’s no secret that Gwinnett is one of the tastiest counties in metro Atlanta.

Thanks to a melting pot of different people and backgrounds, there’s a restaurant for nearly anything your taste buds desire. If you’re having a hard time narrowing your choices down, don’t worry— we’ve got you covered. Keep reading to see what the 18 must-try dishes are in Gwinnett.

Do you wish you could have brunch anytime, any day of the week? You’re in luck, because Local Republic, in the heart of downtown Lawrenceville, has some of the best shrimp and grits around—and it’s available at lunch and dinner. The grits are creamy and topped with wild-caught shrimp, housemade andouille sausage, and a light roux. Zesty and flavorful!

A chic Italian restaurant in downtown Buford, Aqua Terra Bistro has been making regulars of diners since 1999. Although there are numerous mainstays on the menu, the one that would cause a riot if it were taken off is the seared scallops. Plump scallops are served atop orecchiette pasta tossed in a truffle-mushroom cream sauce. Rich and oh-so good! 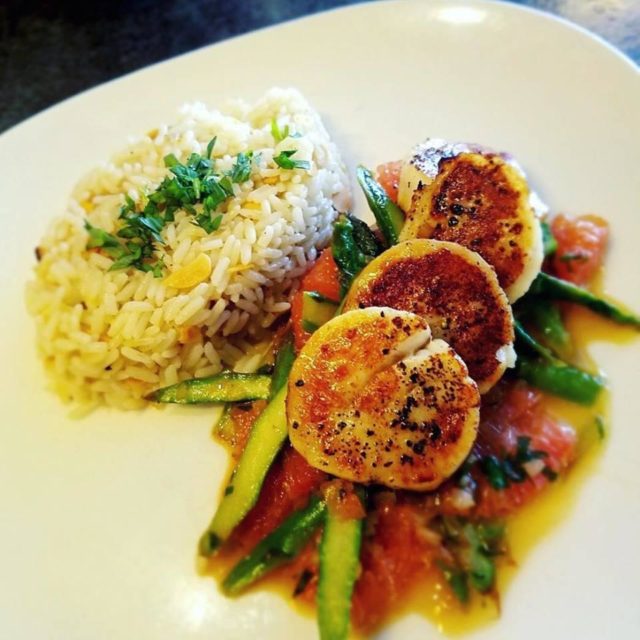 Norcross is home to Mojitos, a restaurant specializing in Cuban cuisine. Bring your appetite and order the paella. One serving of the classic Spanish dish is huge! Yellow rice is cooked in a fish broth and combined with scallops, mussels, squid, chicken, and pork pieces. It’s served in a piping hot cast-iron dish, making for a meal that’s as beautiful as it is delicious.

Casual and convivial, Ba Bellies is an Asian gastropub with a heavy Vietnamese influence. Each dish packs bold flavors, but the Fish Sauce Caramel Wings are in a league of their own. A unique blend of fish sauce, garlic, chili flakes, and palm sugar makes for wings that are sticky, spicy, and tangy. They might sound funky, but one bite and you’ll be unable to resist that umami.

Once an ITP darling (that’s inside the Perimeter to you Atlanta newbies), O4W Pizza now resides in downtown Duluth and lures people from all over for its Grandma Pie. A thin crust and a square shape make the base for this cult favorite, which is topped with housemade marinara sauce, fresh mozzarella, basil, extra virgin olive oil, and Pecorino Romano cheese. Note: You can order it by the slice at lunch.

A hip spot in Lawrenceville that’s not even a year old, Parkside District offers a comfortable, casual atmosphere. The dinner menu is chockfull of great choices, but the best dish is found on the lunch menu. The Atlanta Hot Chicken Sandwich pays tribute to a Nashville classic with country-fried chicken breast, garlic-chili soy sauce, green goddess coleslaw, dill pickles, and a side of herbseasoned fries. 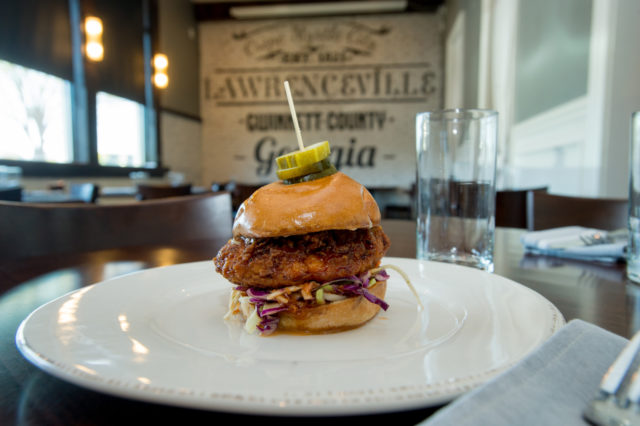 One of the newest spots in downtown Duluth, Good Word is part restaurant and part brewery. The menu blends Latin and American flavors, but the standout dish here is the Americano Hamburgesa. Two grass-fed beef patties are smothered in cheese, sauteed onions, lettuce, tomato, and housemade burger sauce. Wash it down with one of the restaurant’s own beers, like the Golden Moose, a German pilsner.

When you walk into Frankie’s, located on the third floor of the Gwinnett Chamber building, you may feel as though you’ve stepped back in time to Old Hollywood. The decor is dark and plush, and on weekends you’ll find a live band paying tributes to the greats. Frankie’s delivers more than just style, however. The 16-ounce bone-in filet is a mouthwatering cut of meat cooked to your liking. Frankie’s uses Black Angus meat from corn-fed cows raised in Omaha, Nebraska. The filet is delicious by itself but is even better with a side of lobster mac and cheese.

People flock to Bare Bones in Buford and it’s no wonder why: The elegant atmosphere and inviting booths make for a lovely evening out and, of course, there’s plenty of delectable steak. The real surprise here, though, is the onion ring appetizer. A mountain of battered and fried onion rings is covered in honey, cheese, and chili. It kind of looks like a plate of doughnuts at first glance and is absolutely addicting.

What started as a food truck has evolved into a cozy family restaurant in Dacula. An amalgam of the founders’ names, Edmund and Dee, Edee’s wants everyone who comes in to feel at home. Order the rib tip plate: Succulent, seasoned rib tips are served with two sides (we suggest the garlic-Parmesan fries and housemade mac and cheese). You can also pick your sauce, with hot and mild options.

Don’t be fooled: There’s nothing simple about Simply Done’s doughnuts. Each of the 25 doughnuts is a mini, cakebased treat made to order with toppings of your choice. Our favorite is the Man Bait doughnut with a maple glaze and bacon crumbles. It’s a sweet and savory combination that reminds you of lazy Sunday mornings. If you like a warm beverage with your doughnut, there’s a full coffee program with espresso beverages.

Tucked away in an unassuming Duluth strip mall, Uncle Jack’s Meat House is a sneakily highend joint. Of course, there are plenty of cuts to choose from, but the star of the show is actually found in the burger section of the menu. The Ooey Gooey Mooey Burger is a mouthful to say and even more so to eat. It’s a blend of prime beef smothered in secret sauce, onion jam, maple-pepper bacon, and buttermilk-blue cheese fondue. You may need a fork and knife for this one! 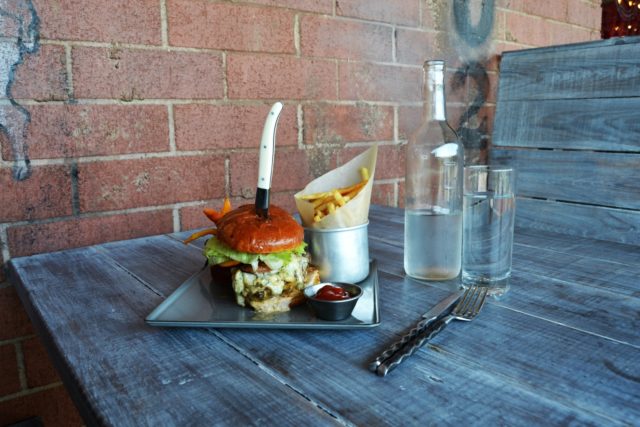 Laidback and colorful, Ten Bistro is the type of place that makes you want to hang out for a bit. It specializes in New American cuisine and uses local ingredients as much as possible. Go big and treat yourself to the Manhattan Flat Iron Steak, grilled and thinly sliced. It’s served with truffle mashed potatoes, grilled asparagus, caramelized onions, and sherry gastrique, making it one extremely crave-worthy combination.

After losing his job at a church, Will Turner found his true calling: a food truck he called the Blaxican (“Blaxican” is a slang word used to describe people of Mexican and African American descent, and Turner says it perfectly describes his Mexican soul food.) And Turner now has a restaurant, too. It serves tacos and sides, but the true star is the Collard Green Quesadilla, featuring collards cooked in a smoked turkey broth with a side of Mexsoul sauce.

Another Buford charmer, Rico’s is an inviting restaurant offering retro vibes and comfort food. If you have room in your belly for only one dish, make it the Royal Rooster sandwich. It’s a zesty treat, with chicken fried in a habanero sauce, topped with baby Swiss cheese, and served on a potato bun. It comes with crunchy and delicious housefried potato chips.

Located on Main Street in downtown Lilburn, 1910 Public House is modern and cool. Don’t let the modernity fool you, though, because the restaurant does classic Southern oh-so well. Case in point: The team makes their own pimento cheese from scratch. You can order it by itself as an appetizer, but indulging in the grilled pimento cheese sandwich is the way to go. Pimento cheese, fried green tomato, and bacon on grilled sourdough make for a heavenly sandwich indeed. 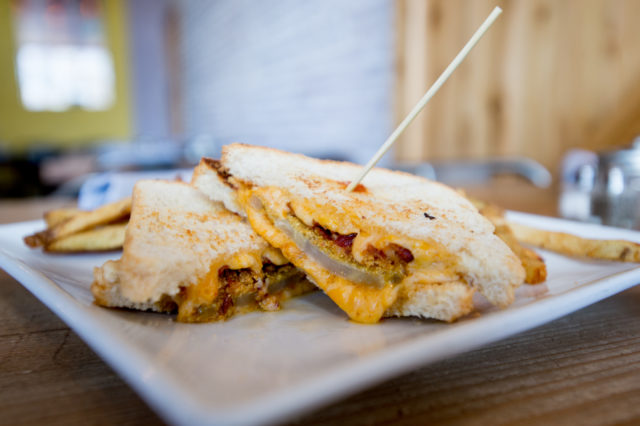 When Cliff Bramble opened Noble Fin in Peachtree Corners, it was an instant delight. The atmosphere is elegant and open, especially when the sun streams through during the day. There’s a raw bar, several types of fish, and steak options, but the must-order dish is the Maryland Crab Cake. It’s chunky with big pieces of crab and served with crackers, tartar sauce, and Bibb lettuce.

The Market A Norcross Eatery (Norcross)

When you need a healthier dish, The Market's Superfood Salad is a must. Adding salmon to this already delicious salad makes it a filling and fabulous meal.The salad is made up of a blend of raw chopped vegetables, smoked almonds, dried cranberries, pepitas, dried apricots and vidalia.