Little Barn Apothecary is a natural and organic skincare and beauty line created and located in Gwinnett. We interview founders Joshua Morgan and Brad Scoggins at their home studio in Stone Mountain.

Explore Gwinnett: Tell us a little about your back story and how you guys met and started Little Barn Apothecary.

Joshua Morgan: We met five years ago. I had just moved back to Atlanta. I had lived in Chicago for six and half years. I’m from the Midwest originally, then went back for a job and came back to Atlanta because I missed the South and the weather. We met and you were working in the restaurant industry at the time?

Brad Scoggins: Yes, I was in hospitality.

Joshua: I had been in the beauty industry for 17 years, so had worked for a lot of the big brands. I had done everything from education, training, sales. My previous role was the vice president of sales for another company. I was just honestly ready for a change and wanted to do something on my own. Brad has a background in Biology, so he does a lot of formulating of our products, which is really great because I do a lot of the sales and marketing. So we are kind of like the yin and yang to the brand, which is nice. We definitely compliment each other.

Brad: My background is all over. Biology – when I first started out, I wanted to work in the medical field, so I did that for seven years before moving to Atlanta. Then when I moved here, I got into hospitality and marketing and sort of just changed the whole path. So it’s fun to get back into the science and chemistry side with this. It’s not really expected – when you think skincare, you don’t think chemistry, but there’s a lot of chemistry and science in it.

Joshua: I found, being in the industry so long, that there’s this resurgence of popularity with natural, but there’s not really a cool brand out there that’s really natural. It’s all kind of a little bit “hippie dippie," and there’s not a whole lot of education out there when it comes to really talking about what the ingredients do for you. Using things that are paraben free and organic. That was sort of part of our philosophy initially. We wanted to create a cool, modern brand that was natural, that both men and women would both love to have sitting on their vanity. When we initially launched in January, I think we hit the sweet spot because we did launch kind of this cool, hip, indie brand that we had a vision for. I think people really embraced it. Not only were our products effective, they felt good, and they smelled great. We were being very selective with our formulations. In all of our formulations, we use no more than seven ingredients, so we really try to stay tried and true to that. Completely paraben free, gluten free, 100% vegan. We live a very natural lifestyle anyway on a daily basis. I had worked in the industry for so long and had been pumping my skin with all these chemicals that I just wanted to walk away from. And they weren’t effective [laughs].

We wanted to create a cool, modern brand that was natural, that both men and women would both love to have sitting on their vanity.

Brad: It’s really scary when you start reading labels and you pay attention to what you’re putting on your body, that’s essentially in your body – creams, lotions, soaps – I mean all of it. They are just filled with synthetic, weird, crazy, chemicals. It’s great to be able to educate people. You can find alternatives. You don’t have to use all these synthetic chemicals to have smooth skin or moisturize.

Explore: Where did the name Little Barn Apothecary come from?

Joshua: We love that question.

Brad: We played around with a lot of different names. Our first concept was very country western almost.

Joshua: Kind of shabby chic. We were originally trying to target a female consumer, because we thought that was who was really going to embrace a bath and body product. Then we found a lot of men were seeking natural products as well, so we didn’t want to pigeonhole ourselves. We wanted to stick with a very natural theme. Brad grew up in South Georgia on a farm, and I had grown up in the big city. So we wanted it to have that natural feel, but we also wanted it to be modern. In the design, the barn has a very modern twist.

Brad: Very minimal. We wanted to play with both sides – like the farm boy and the city boy. Where it’s not really pushed in your face.

Joshua: We wanted to marry nature and science, but not look so stereotypical organic. We kept everything black and white with the packaging because we want the packaging to be secondary to what’s in the bottle and what the products are doing for you. 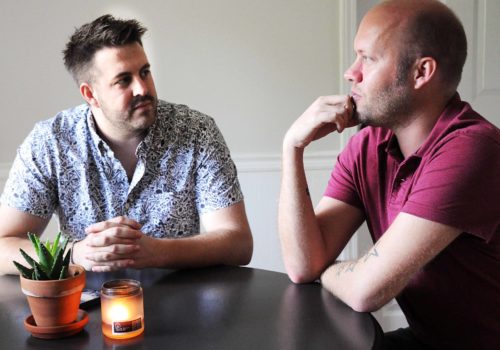 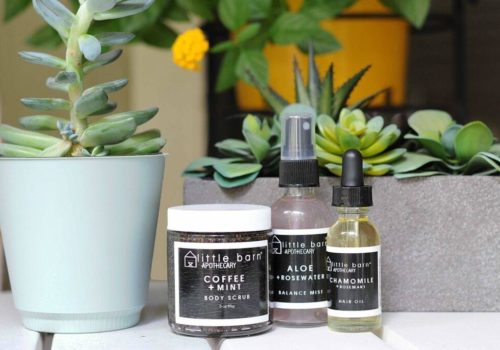 We wanted to marry nature and science, but not look so stereotypical organic.

Explore: You guys just launched earlier this year and are already working with big brands like Urban Outfitters and Free People. What do you think it is about you that these “hip” companies are attracted to?

Brad: I think it’s just having something that’s different. Being unique and being from the South – there are no other interesting skincare lines that are being developed in the South.

Joshua: That’s just what we’ve found. Urban Outfitters found us four weeks after we launched. They had said what really attracted us to you guys is there’s no other kind of really cool, unique brand like yours that are based in the South. You always find people on the West Coast or LA or New York, but there’s nothing really happening in the South. They have a really heavy consumer base in the South that’s looking for natural products.

Explore: How did you guys decide on this area in Stone Mountain to live?

Joshua: We started looking for houses about two and half years ago when we were still living in the city. We both love nature and we love to be outside. We are two miles from Stone Mountain Park, so we have an annual pass. We have four dogs, and we like to be outside with them. We love to go to the park and climb up the mountain. It’s a good way for us to decompress. Working and living in the same space can be very difficult, because we just never get away from our work. We looked at a bunch of different areas, and we just fell in love with this area because it was very family focused. It’s just a great area for the outdoors. A lot of green space out here. You kind of get away from the hustle and bustle of living in town, but you’re also only 15-20 minutes from the city, so it’s a really nice retreat.

Explore: What would make your best of Gwinnett list?

Joshua: 3 Blind Mice – we stumbled upon that through a recommendation and the food is amazing. It’s very unassuming but really good food. It’s just perfect. We like that type of cuisine. Their salmon’s amazing. We spend a lot of time outdoors; we go to Stone Mountain Park and Mountain Park Park, take the dogs there.

Joshua: Definitely Stone Mountain. Whenever we have friends or family that are not from the area, they are always like “take us to the laser show." We’ve been probably 25 times. They love to go to the top of the mountain too.

Joshua: I like the Braves – I love going to baseball games.

Explore: Who are your local heroes?

Joshua: This is kind of cliché but I mean, Martin Luther King is just such a huge inspiration. Definitely hero status.

Explore: What would have been in your CD player in high school?

Joshua: I was in competitive show choir and theater growing up, so I listened to a lot of show tunes [laughs]. But I was also into a lot of 90’s hip-hop, so Bell Biv DeVoe was a big one for me. Salt-N-Pepa.

Brad: I always liked old country. Reba McEntire was my favorite, because she was my mom’s favorite too.

Explore: Do you have a hidden talent?

Joshua: I studied ballet in college, so I danced from the time I was four. I danced at a theme park for five summers [laughs].

Brad: Do I have one?

Joshua: He’s like a history buff. You can throw anything at him and he knows it.

Explore: Would you rather time travel or space travel?

Explore: What do you wish people in other parts of the country knew about the South?

I wish people knew that it’s not stereotypical “South” – like it’s not country bumpkin.

Joshua: I wish people knew that it’s not stereotypical “South” – like it’s not country bumpkin. Atlanta’s very progressive and cosmopolitan. It’s the Manhattan of the South, as people call it. I have friends that will come here who’ve never been here before and they came for the first time – and they are just in awe of how beautiful it is. Atlanta specifically is very progressive. It’s conservative to an extent, but it’s very liberal here, which is kind of nice.

Brad: It’s just beautiful here, the South. You can’t find it anywhere else. Growing up on a farm in the middle of nowhere, you really learn to appreciate it.

Joshua: There really is such a thing as southern hospitality. People think it’s just a term, but there really is. I didn't grow up in the South, but I’ve lived here on and off for almost 20 years. When I lived in Chicago, it’s hustle and bustle. It’s very big city – like living in New York where people just want to run over you. Here people are very accommodating, and they want to help you. Just a different lifestyle, which is nice.