Lilburn resident Brian Burchik is the creator of “Lilburn is Hip” shirt and founder of a Lilburn Running Club. He serves on the Lilburn Planning Commission and has been newly elected to the Lilburn City Council. We talk with Brian at 1910 Public House in Lilburn about his passion for the Lilburn community and what’s next for the city.

Explore Gwinnett: You grew up in Gwinnett County; what are some of your fondest memories growing up here?

Brian Burchik: Playing in the neighborhood with a lot of kids on our cul-de-sac and swimming at the neighborhood pool; Parkview football games that I began going to as a kid and followed all the way through high school; activities in the community; playing sports as a kid and having some of the same friendships growing up all the way through. Some of those friends are even here today, which is amazing.

Explore: Did you always know you wanted to do something for your hometown?

Brian: No, not at all. I never envisioned moving back, probably wouldn’t think that would be cool at all after graduating college, so it was a total surprise. As we were married and then had our first kid, we just found ourselves starting to orbit around this area and seeing the potential of the downtown and really decided we want to be a part of helping shape the future of it.

Explore: Do you think that’s what made you want to move back?

Brian: Yeah, I think what most motivated us was that we saw the potential. And like so many other people right now, we were craving the walkable community, the idea of living amongst friends and enjoying the benefits of a small town where you can really know people. What drew us to Lilburn as opposed to some of the more developed neighborhoods in Atlanta was that we felt like we could actually be a part of building something here. It’s not that established yet, so we could help influence it in a positive way and maybe attract others to come join.

“…we felt like we could actually be a part of building something here.”

Explore: What do you see this community doing to help build up Gwinnett?

Brian: The local government is doing a lot of amazing things in terms of city events. Food Truck Tuesdays all through the summer and fall have been a huge hit. They’ve done concerts in the summertime, so that kind of stuff is great. There’s a lot of projects right now. There’s a brand new library going in, and they are about to do a big project with double sidewalks all the way up Main Street. They want to make it more walkable. I am just grateful for a local government that gets that kind of a vision. Then there’s just the people. The owners at Music on Main Street do outdoor concerts every Saturday night, which brings out this whole crowd. There’s this restaurant [1910 Public House] that’s been huge for the community. Public House coming first paves the way for more restaurants to jump in, which I hope to see happen. We started a Lilburn Runners Club, so every other Saturday morning we run and come here for coffee.

Explore: Where do you see this area in five years and how do you hope to play a role in that?

Brian: I joke that Lilburn is the next Decatur. I see specifically this downtown area developing with a lot more entertainment and social life, whether that’s more restaurants or coffee shops, or just places for people to gather and connect. I see more young families that have moved in and remodeled homes, and been a part of renovating some of these spaces.

Explore: When did you decide you wanted to run for City Council and what made you decide to do so?

Brian: I decided about a year ago that I wanted to pursue a more formal involvement in the local government. It was just a natural overflow of what we were already doing. We already felt a real passion for Lilburn and for attracting new families and new business and naturally spoke with a lot of pride about where we felt like it could go. It just seemed natural to run after a more formal leadership role.

Explore: What is the inspiration behind “Lilburn is Hip?”

Brian: I love branding and that goes back to just previous jobs where I saw the power of good design and good t-shirts. If you create a good shirt, people keep wearing them. I had seen several different shirts that branded cities like “Keep Austin Weird” or “I Believe in Atlanta.” I really felt like we needed something like that in Lilburn, but I didn’t want to force it. Around that same time I heard that the owner at Music on Main Street, Scott Mecredy, had this mantra that he would always say at the Saturday night concerts. He would say “Lilburn is hip,” and everybody would yell it back to him. As soon as I heard that I was like, this could be it. This could be a unifying thing because it’s not contrived; people are actually doing this and they’d been doing it for years at that point. Even just the word “hip” – I felt like that could connect generations because you have those that remember the hippies or were hippies and lived in that time, but also today with “hipster” and the reemergence of that idea of being hip. I felt like young people would like this; older folks could like this. This could be a great unifying mantra for the city.

“This could be a great unifying mantra for the city.”

Explore: Tell us about the runners club you started.

Brian: This is brand new. Being a runner, even several years ago running through this area and seeing running clubs in places like Decatur and Atlanta, I just felt like this could be a fun way for people in Lilburn to connect together and support local businesses. 1910 Public House is going to open for us to come have coffee, breakfast, and beer perhaps. The more community driven stuff, the better.

Explore: Describe living in Downtown Lilburn - how is it different and how is it the same from when you were growing up here?

Brian: Living in Downtown Lilburn is a lot different than the neighborhoods that I grew up in only because there are walkable places to go like the park, the restaurants, the market - which was never an experience I had growing up. Almost every night I go running in the park with my dog. It’s all lit up, it’s great, and it’s right there. We constantly go to the park with other young families and play. Probably the biggest difference is intentionally living on the same street as our friends. There are four other families and we are all super close and all live on the same street. That’s probably been the biggest change, when you can naturally run into each other because you live next door. You just relate at such a deeper level than if you have to drive to each other’s houses. When you live so close to each other that you are going to see each other going to get the mail or taking out the trash, you just get to relate to each other in such a close way.

Brian: There’s a good variety of people. A lot of little kids, several moms that work part-time or stay at home with their kids. Some of my friends are commuting more towards Atlanta. Others have their own business so they work from home, like myself. We recognize that there are a lot of things about our society right now that tend to pull us further away from each other, like technology. It’s easy to get isolated, so we are trying to figure out how we can integrate together and be more intentional about being together. It’s like an experiment – a Lilburn experiment – like what is it like to try to really live in close community and support each other. 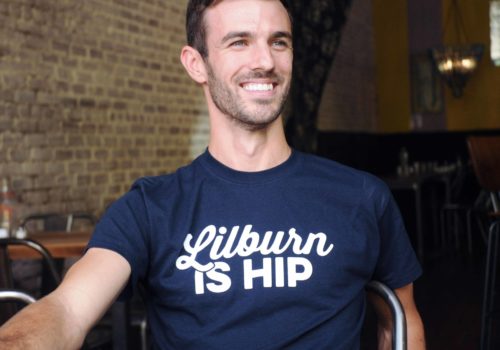 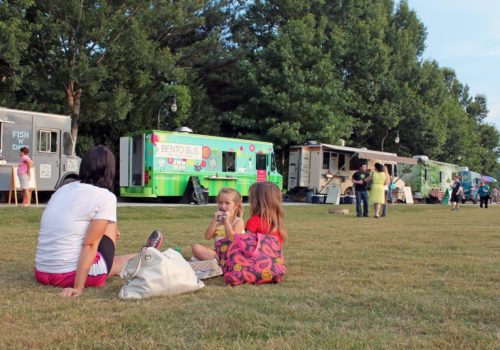 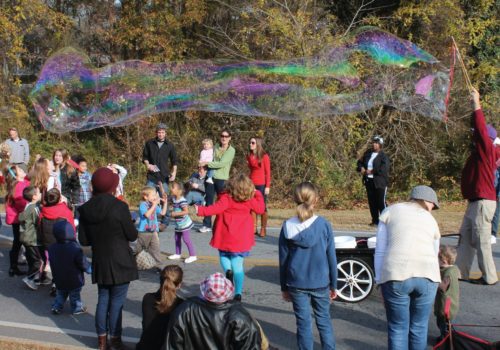 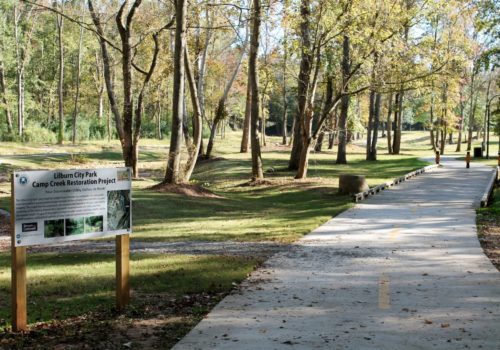 Explore: You are on the Lilburn Planning Commission. You mentioned the new library - do you know of any other things that are in the works right now?

Brian: Aside from the library, which is actually in progress, there’s a large piece of land directly across from the library that is in the process of being purchased and developed as a mixed-use space. It would have nice living opportunities as well as a lot of retail and commercial space. So with the library on one side and this nice development on the other side, that really has the potential to be an amazing entranceway into the city and hopefully draw people off Highway 29 to come in. They are trying to really invite people in with a great city entrance.

Explore: Gwinnett is called “Atlanta’s Playground” where is your favorite place to “play?”

Brian: Lilburn Park is our family’s favorite place because we can walk there. We love Tribble Mill Park as a place to walk and hike. Stone Mountain is great.

Explore: What would be your Best of Gwinnett list?

Brian: The Hawks - I played basketball growing up, and I think there is some fun momentum for that team right now. Falcons, Braves and of course, UGA. That’s my alma mater, that’s where I met my wife, so I am forever indebted to UGA.

Explore: Who are your local heroes?

Brian: The Mayor, Johnny Crist is definitely a hero. He is a real visionary and a lot has happened with his leadership. We have a similar background because he was actually a pastor for years, so that has been encouraging to see those skills used in that space and translated well to leadership in the city. Scott Mecredy is a hero for sure, the owner of Music on Main Street. They have been really investing in entertainment here for longer than anybody and he’s been declaring, “Lilburn is hip.” My daughter’s principal is a hero – Valerie Robinett at Camp Creek Elementary. She is local, grew up here, went to school at Parkview, and now she’s back and she is bringing a lot of energy into the school system. She has a lot of passion.

Explore: What do you wish people in other parts of the country knew about the South?

“There is a lot of creativity, innovation and passion in the South.”